Armed with his 60-piece orchestra, the much-loved Dutch violinist André Rieu is returning to the UK for an exciting 2023 springtime tour! Affectionately known as the ‘King of Waltz’, Rieu has had over three decades’ worth of experience in capturing an audience with his showmanship and his performances never disappoint. 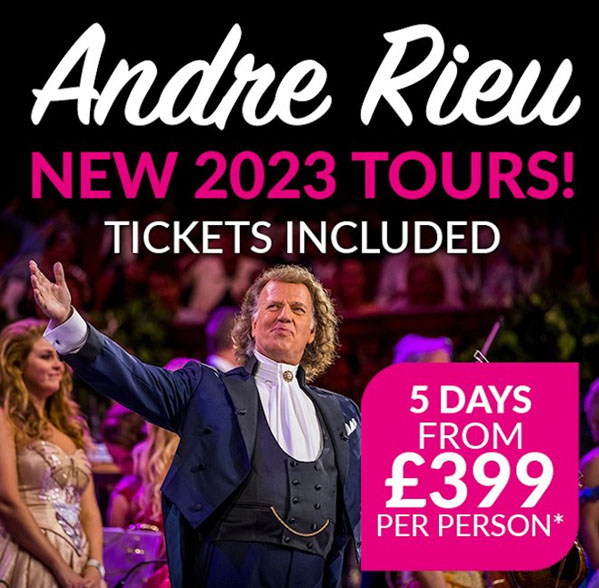 A memorable experience like no other, come and see Rieu front the transcendent Johann Strauss Orchestra as they journey through an emotive set list of romantic, emotional ballads and the most celebrated of waltzes. The culmination of world-class musicians coming together to perform a whole host of stunning scores guarantees a truly special evening – don’t miss out! 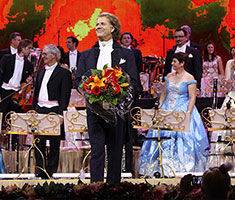 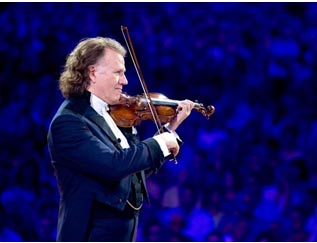 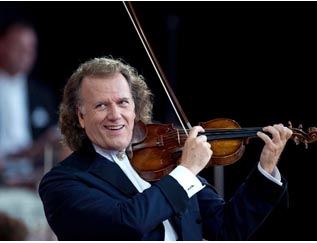 See the modern day 'King of Waltz' perform as Andre Rieu brings the joy of classical music to millions across the world through his Johann Strauss Orchestra. Extravagant costumes and sumptuous set design accompany the traditional waltzes and quirky adaptations of modern tunes.

Back by popular demand!
These 5 and 7 day breaks staying at a selection of Leisureplex Hotels, include tickets to the spectacular Andre Rieu concerts in Leeds and Liverpool for his 2023 UK tour!

Yorkshire and North West based holiday-makers can enjoy a 5 day stay at one of the fabulous Leisureplex Hotels below next May.

Plus, don't forget tickets and excursions are included in the tour cost!

Those travelling from the South and the Midlands will enjoy a stay at either our wonderful Monarch Hotel in Bridlington or our Cumberland Hotel in Scarborough.

Plus, don't forget tickets and excursions are included in the tour cost!

Violin superstar André Rieu has made classical music accessible to millions around the world and has turned the waltz into an international sensation, recently extending his record as the highest grossing classical artist in Billboard’s Boxscore history.

Further, he continues to be the classical act with the highest attendance regularly outselling the world’s top pop and rock stars. Rieu has had football crowds swaying to Shostakovitch and has sold over 40 million albums. His romantic and joyful programs include a mixture of light classics, waltzes, music from film and opera as well as pop songs, performed by his Johann Strauss Orchestra, the biggest private orchestra in the world.

His concerts are also a visual treat, from the sight of Rieu and his musicians entering through the crowd and up on to the stage at the beginning of the concert, to the lavish costumes and the vast screen behind the orchestra displaying beautiful imagery tailor-made for each song. André Rieu performs for over half a million people each year. His YouTube videos have reached far over one billion views and 8 million fans follow the “King of Waltz” on Facebook.

André Rieu is not just for an evening. He is for life!